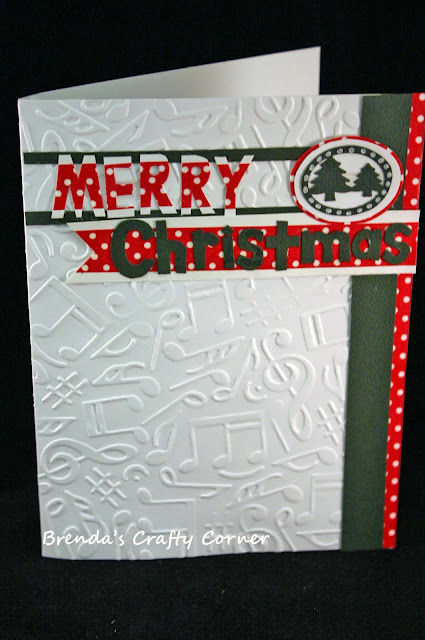 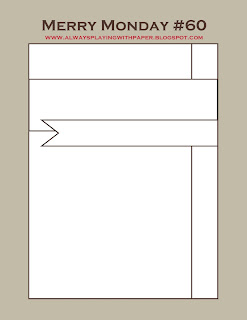 Always Playing With Paper has a new Merry Monday Christmas Card Challenge based on a sketch by Debbie Marcinkiewicz. It's a fabulous sketch! When I first saw it, an image of the card I wanted to create popped into my head.  I began by layering red decorative tape  with white polka dots along a strip of white cardstock. Then I handcut the word MERRY from it leaving a slight white edge on the top and bottom of each letter. I adhered the letters to two strips of dark green cardstock.  From the same dark green cardstock, I handcut the word CHRISTMAS and matted it on a piece of white cardstock with the red tape running down the center. I cut the end of it into the shape of a banner before adhering it beneath the word MERRY. I added red polka dotted decorative tape down the right side edge of an embossed cardbase and layered a piece of green cardstock partially over the tape. The trees were punched then I cut around them in an oval shape. I layered the trees onto a piece of white cardstock, then onto a piece of cardstock with the red decorative tape. I finished by adding small white polka dots on the green oval surrounding the trees.
Supplies: Cardbase: Recollections, Cardstock: Bazzill (green), Recollections (white), Punch: All Night Media, Darice Decorative Tape, Embossing Folder: Spellbinders, Adhesives: Scotch ATG, Scotch Quick Dry