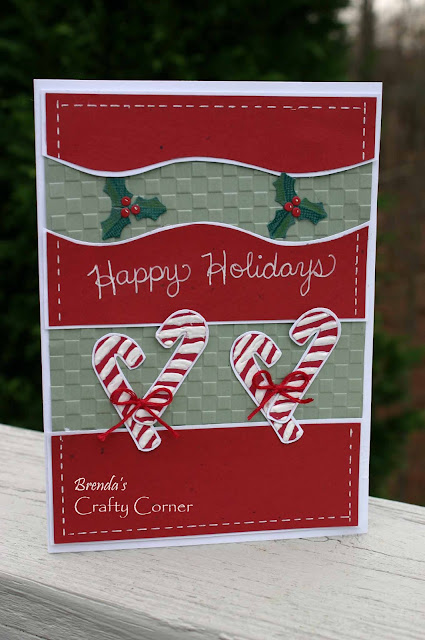 Yesterday I was looking through my pile of completed Christmas cards and realized that I had very few cards with candy cane images.... so I decided to create this one and play along with the holiday food challenge at Jingle Belles. I began by cutting candy cane shapes from red cardstock and added white gel pen stripes. I didn't like the gel pen stripes...they were too faint. So I covered the stripes with paint instead.  I cut red cardstock into three pieces and matted each with white cardstock. Next I attached the tips of the candy canes to the two lower pieces of red cardstock. I dry embossed green cardstock and layered the red and white pieces over it and added the holly, bows and the sentiment. I wasn't sure that I liked the addition of the green, but without it there was just too much white. Also, now that I look at it, I wish I would have used my sewing machine instead of the gel pen to add the stitching around the outer edges(including the green), but I guess it's too late now.
Posted by Brenda at 9:11 AM