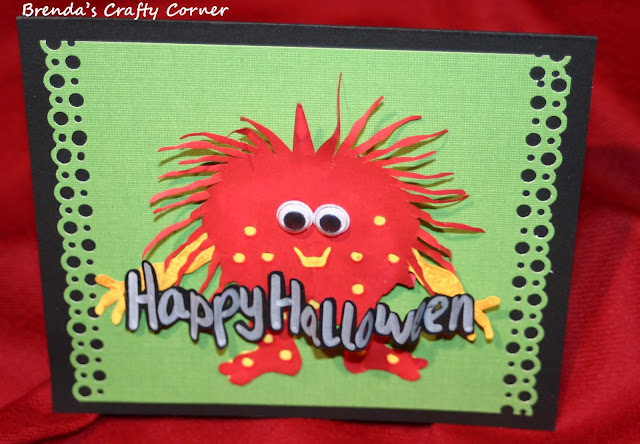 There is a super fun challenge over at Creative Time for Me hosted by Tracy from http://tracyscricutcorner.blogspot.com/. The challenge is to used googly eyes.  Love it! I didn't have to think about this card much. An idea started to brew right away. I started by folding a piece of red cardstock then used my scissors to cut out this little critter. To give it a polka dot look, I  randomly punched holes, attached yellow cardstock to the back and then added the googly eyes. I played around with 3 eyes, but didn't like it as much as with just two. Then I cut my version of arms from yellow cardstock and added some detail with a red colored pencil.  I mounted the critter on DCWV Spring Fling. I also used a Martha Stewart punch to add the border on the green cardstock. For the sentiment, I used a white marker and wrote Happy Halloween on black cardstock then fussy cut around it. To add some dimension, I accordion folded the sentiment and adhered it between the two hands. I used a black card base, but inside I added a second piece of the green cardstcok with the same circle punched border.
Posted by Brenda at 2:24 PM

Email ThisBlogThis!Share to TwitterShare to FacebookShare to Pinterest
Labels: Creative Time for Me, Googly eyed critter