We Make a Great PEAR card

This is my second card for the shaped card challenge at Simply Less is Moore.  I am having a blast with this challenge!  So here's my card: 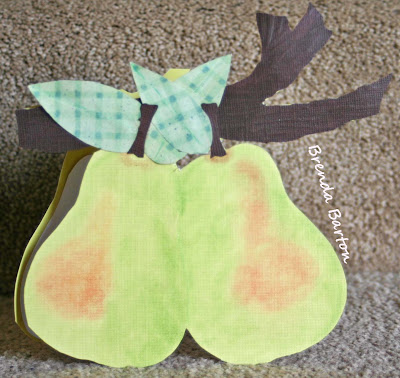 This will be an anniversary card. The inside sentiment says ....We make a great "PEAR"  Happy Anniversary!  I started with a piece of  folded greenish-yellow cardstock.  Then while looking at a pear from my fruit bowl, I simply cut the pear shapes out with a pair of scissors.  I cut a branch from dark brown cardstock, embossed it a wood grain texture and adhered it to the card base. I cut around the branch with scissors and used an Xacto to trim between the pears.  I cut the leaves from patterned paper and adhered them to the card along with a few stems that I cut from brown cardstock.  To make cardstock look more "pear-like" I chalked it with green and red chalk.  I added a white pear shaped piece of cardstock that is slightly smaller than the card inside and printed the sentiment on it.


Thank you so much for visiting!
Posted by Brenda at 1:59 PM

Email ThisBlogThis!Share to TwitterShare to FacebookShare to Pinterest
Labels: Shaped Card, Simply Less is Moore, We Make a Great Pear