I'm linking this next card to two challenges.  The first challenge is the Freshly Made Sketch Challenge and the second is for the  Lily Pads & Simon Stamps Star Challenge   The card ended up being a little more simplistic then what I had intended, but it will work as a thank you. I used dimensional adhesives on the square frames around the stars, under the four largest stars and the layers under the thank you.  I hand cut the letters for the sentiment so that they would match the color on the rest of the card.  It is really hard to see, but I inked around the inside edges of the frames, around the kraft cardstock behind the thank you and the outside edges of the card. The ink was an orange color, but looks more yellow on the kraft cardstock.  I really liked the sketch and attempted to use the same layout with the sentiment piece over the edge of the squares. It just didn't look right so I played around with them.  I tried setting them at an angle and placing  the sentiment portion over the edge of the frames.  In the end I decided I didn't like the overlapped look with these elements and ended up settling for a cleaner look. 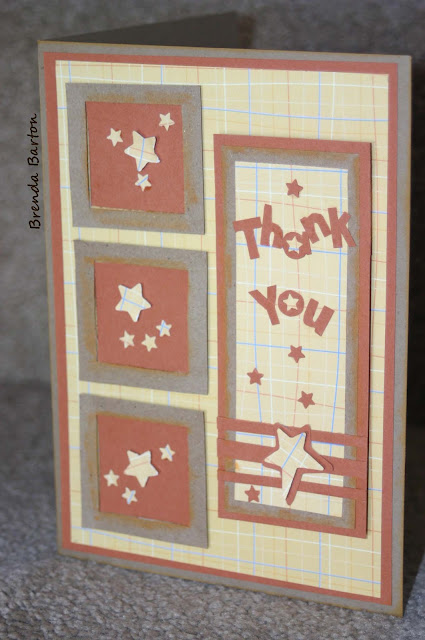